...And the disciples were first called Christians in Antioch. ~ Acts 11:26

The simple exterior of the St. Elias Antiochian Orthodox Church at 716 Copeland Avenue disguises the dramatic saga of its beginnings and the exquisite beauty of its interior. Located on a busy thoroughfare, the small clapboard-covered church was built in 1912 and represents the 20th century Gothic Revival style of architecture. More importantly it symbolizes the desire of the descendants of the Orthodox Christians of Eastern Europe to establish a base for the practice of their faith in the city of La Crosse. 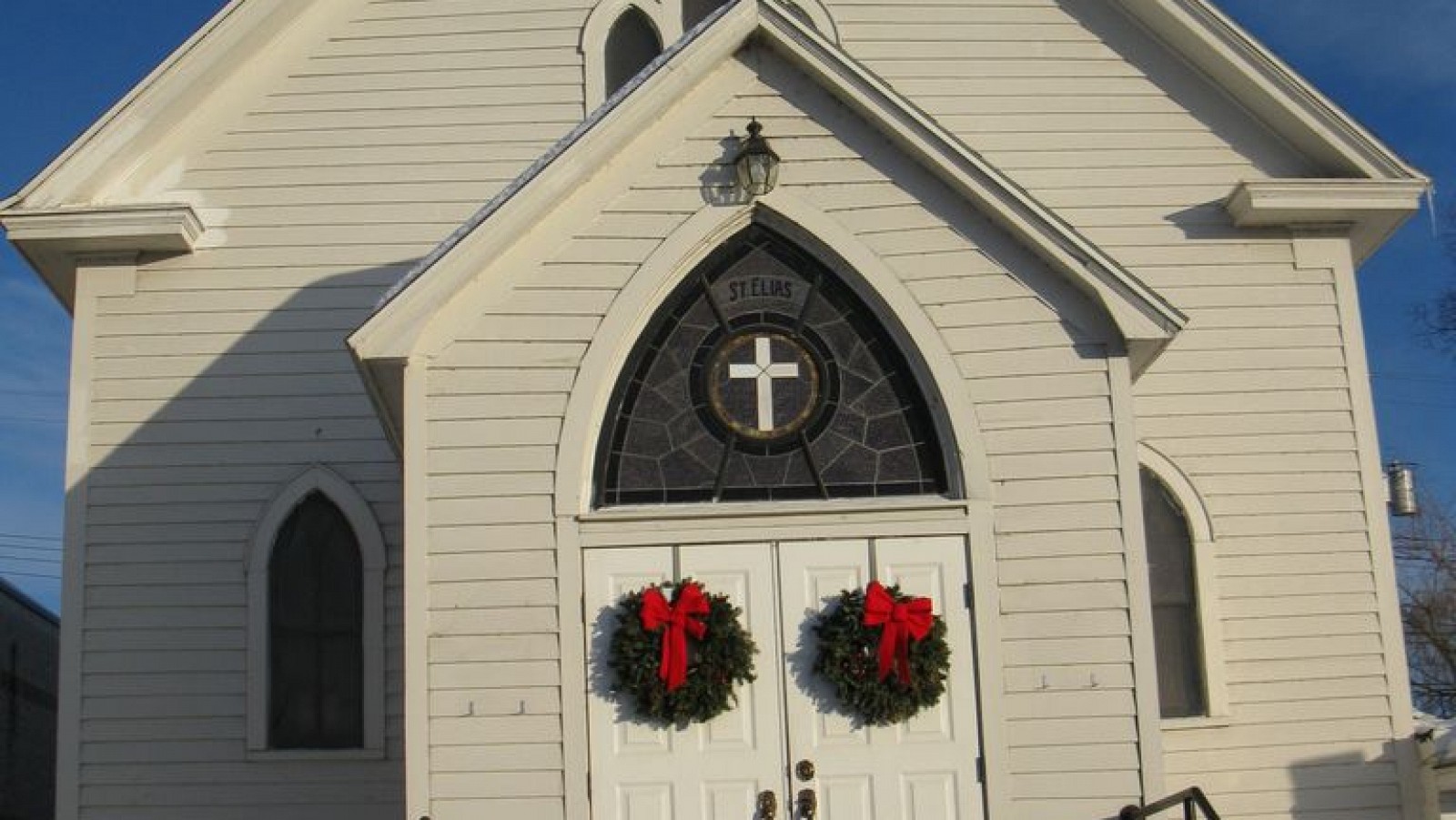 Because an increasing number of Syrians and Lebanese were arriving in La Crosse, the Syrian Orthodox Society decided to build a church. According to Richard Markos, 1216 Bluff Street, St. Elias from the beginning was open to any of the Orthodox Christians Greek, Lebanese, Serbian and Russian as well as Syrian.

The land on which the church was to be built was purchased from the local Gund family on April 12, 1912 At that time the basement was dug and on January 29,1913, the floor of the church was laid at a cost of $80 and the church itself completed at a cost of $125. Part of the work was done by members of the Building Committee among whom were George Sady, Slyman Munyar, Elias Farrah, Abraham Slyman, Matt Monsoor, Michael Skaff, Carum David, Father Askaar and David Moses. The church was dedicated by a Syrian Antiochian Bishop in 1917.

Markos attributes the loss of several members of St. Elias in the 1920s to the attraction of the wine industry in California, since many Syrians and Lebanese had traditionally been wine makers in their native countries. Another factor was the desire of some of those who remained in La Crosse to be able to attend religious services on a regular basis, the result being that these people became members of either the local Episcopal or Catholic churches.

The restoration of St. Elias Church and its congregation to its present status began in 1976 when a group of interested Greek and Syrian/Lebanese people initiated plans to re-establish La Crosse's Orthodox community. Concern for the lack of a resident priest for approximately forty years and the deterioration of the largely unused church building prompted the group to action.

They were joined by interested people of other nationalities as well. Both Walter and Curtis Baltz who were from a Germanic background were influential in the renewal effort.

Although all Orthodox churches celebrate the liturgy in basically the same way with only the language being different, the steering group determined that the most feasible choice of affiliation was that of the Antiochian Orthodox Archdiocese. Thus the advice of the Reverend John Khoury of the St. George Orthodox Church in St. Paul, Minnesota, was solicited by Michael Ablan, a parishioner and a La Crosse attorney.

Ablan was directed to appeal to the Most Reverend Metropolitan Philip Saliba of Englewood, New Jersey, who advised him to contact Reverend Father Constantine Nasr of the St. George Orthodox Church in Cedar Rapids, Iowa, since La Crosse is in the boundaries of the Iowa Deanery. Shortly thereafter, following a visit to La Crosse by Father Nasr in December, a Committee of ten from the Greek and Syrian/Lebanese community was formed to raise funds and to determine the potential church membership.

On September 4,1977, at a meeting of key members of the congregation with Father Nasr, Father Kanavatti and Father Thomas Tsevas of the Greek Archdiocese, authorization was brought from Metropolitan Philip Saliba for the establishing of St. Elias church as a mission. A letter from His Grace Bishop Timotheus, of the Greek Archdiocese, stated that he too “would like to see a community of Pan-Orthodox scope established.”

On October 16,1977, the Divine Liturgy was offered at St. Elias Church by its newly appointed resident priest, Father Barnabas Van Alstine. Then followed the further remodeling of the church's interior, instruction classes for the Non-Orthodox inquirers, the organization of the Ladies' Society and the expansion of the music program. The congregation was to be known now as the St. Elias Eastern Orthodox Church.

The reaction of the parishioners to the reorganization of their church is expressed in the following excerpt from an article written by Ablan for The Word (May 8, 1978), an International Orthodox publication.

On December 4,1977, a gala installation banquet was held in honor of Father Barnabas. This was preceded by the first offering of the Vespers Service that any of us could remember. Assisting were Father Nasr, Father Kanavatti and Father John Khoury of St. George Church, St. Paul. Our guests also included the friends and former shepherds of many of our members, the Right Reverend Frederick Freking, Bishop of the Roman Catholic Church, and the Reverend Christopher Pratt of the Christ Episcopal Church.

Father Barnabas served as a full-time pastor until June 1984 when he was transferred to Lexington, Kentucky. He was followed by Father Damian Criscilla who came to La Crosse from St. Basil's Mission in Ocala, Florida, where he had served for two years following his ordination in his native Pittsburgh, Pennsylvania. Father Damian served the St. Elias community until the fall of 1989. After his departure, the parishioners began congregating each Sunday for prayer reading with periodic Sunday services by Father John Khoury of st. George Church in St. Paul.

The most distinctive feature of the interior of St. Elias Church is its front wall which is known as the Iconostasis. In earliest Christian times, a curtain separated a church's altar from its congregation, and in the Orthodox Church this curtain became a wall on which icons (sacred images) were displayed. Considered an essential part of the church and a medium of instruction, the icons portray the life of Jesus Christ, His mother, the patriarchs of the Old Testament, the apostles and the saints.

They are arranged in a prescribed manner in the Orthodox churches throughout the world. According to Vladislav Andreyev, a well-known iconographer, they serve as “a window between heaven and earth through which the believing eye can peer into the beyond and the beyond sometimes peers back.”

Connie Mahairas (Mrs. Gregory), a member of the St. Elias parish, has been redoing the church's icons to make them coincide with the Byzantine tradition. She explains that icon painting follows strict rules that date back to the first centuries after Christ. Practically every step of the work is prescribed as to the treatment of subject matter and the use of color.

She has already completed ten icons, the most recent one of John the Baptist and the other of St. Elias, the church's patron saint. Eventually she hopes to paint two by four foot pictures to be placed on the front side walls, one of the Baptism of Christ and the other to be decided upon later.

Behind the Iconostasis is the "Holy Place" usually called the Sanctuary. It is accessible by doors at either end of the Iconostasis and by two centrally located doors which reveal the altar when open for services.

Updates to the History of St. Elias Parish

The parish is presently known as the St. Elias Antiochian Orthodox Church, the term "Antiochian" having replaced the word “Eastern” in the earlier name.

Although the St. Elias congregation consists of only a few dozen of members, the members have been active participants in community affairs since their earliest days. Oktoberfest festivities and other civic events along with their own affairs have never found them lacking.

One of their most unusual contributions occurred in 1988 when the Millenium of Christianity in the Soviet Union was being celebrated in Moscow with elaborate religious services. St. Elias joined in the commemoration of the event by co-sponsoring an Antiochian Orthodox Choir with the Viterbo Fine Arts Center. This local concert of Russian Sacred and Folk Music was held on Sunday, October 2,1988. The event was planned to coincide with the annual La Crosse Oktoberfest.

In recognition of their place in La Crosse history and their determination to establish a church honoring their own faith and religious practices, the La Crosse Commission on Historic Sites placed a Landmark Plaque on St. Elias Antiochian Orthodox Church in September 1988.

The Icons on the Iconostasis were completed by Connie Mahairas, in 2006, and Marcee King writing the 12 apostles. Its beauty accomplishes the desired “window between heaven and earth through which the believing eye can peer into the beyond and the beyond sometimes peers back.”

In 2009 the parishioners engaged in a major remodeling of the church. The basement and kitchen were modernized and a new heating system was installed. Many other refurbishments of the church were also accomplished at this time.

There are now approximately 40 families of many different ethnicities making up the parishioners of St. Elias. The services are primarily in English with some Arabic, Greek and Slavonic added to enhance the beauty of the service. Although small in number, the parish is very much alive and thriving. May 14, 2013, St Elias is presented with the Preservation Alliance of La Crosse Heritage Award in recognition for our loving care, maintenance and preservation of our Church building.