St. Elias Orthodox Church
Antiochian Archdiocese
716 Copeland Ave, La Crosse, WI
/ Resources / Daily Readings
Today's Commemorations
Kyriake the Great Martyr, Thomas the Righteous of Malea, Akakios of Sinai, Willibald, Bishop of Eichstatt
Today's Scripture Readings
ST. PAUL'S LETTER TO THE GALATIANS 3:23-29; 4:1-5
Brethren, before faith came, we were confined under the law, kept under restraint until faith should be revealed. So that the law was our custodian until Christ came, that we might be justified by faith. But now that faith has come, we are no longer under a custodian; for in Christ Jesus you are all sons of God, through faith. For as many of you as were baptized into Christ have put on Christ. There is neither Jew nor Greek, there is neither slave nor free, there is neither male nor female; for you are all one in Christ Jesus. And if you are Christ's, then you are Abraham's offspring, heirs according to promise. I mean that the heir, as long as he is a child, is no better than a slave, though he is the owner of all the estate; but he is under guardians and trustees until the date set by the father. So with us; when we were children, we were slaves to the elemental spirits of the universe. But when the time had fully come, God sent forth his Son, born of a woman, born under the law, to redeem those who were under the law, so that we might receive adoption as sons.
MARK 5:24-34
At that time, a great crowd followed Jesus and thronged about him. And there was a woman who had had a flow of blood for twelve years, and who had suffered much under many physicians, and had spent all that she had, and was no better but rather grew worse. She had heard the reports about Jesus, and came up behind him in the crowd and touched his garment. For she said, "If I touch even his garments, I shall be made well." And immediately the hemorrhage ceased; and she felt in her body that she was healed of her disease. And Jesus, perceiving in himself that power had gone forth from him, immediately turned about in the crowd, and said, "Who touched my garments?" And his disciples said to him, "You see the crowd pressing around you, and yet you say, 'Who touched me?'" And he looked around to see who had done it. But the woman, knowing what had been done to her, came in fear and trembling and fell down before him, and told him the whole truth. And he said to her, "Daughter, your faith has made you well; go in peace, and be healed of your disease."
Today's Thought

Ammon complained to the venerable Sisoes the Great that he could not memorize the wise sayings that he read, in order to be able to repeat them in conversation with men. The saint replied to Him: “That is not necessary. It is necessary to attain purity of mind and to speak from that purity, placing your hope in God.” 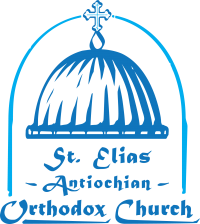 St. Elias is a small church that relies heavily on the generous donations and regular contributions of our parish members, friends and those who have historical ties to the church. A sincere thank you for any support you can offer for the well-being and long term survival of St. Elias.  May God be with you during this difficult time.